This is accomplished using two tools we have at our disposal in Lua:

Coroutines are basically functions that can start and stop as needed. You give them thread control by “resuming” them, and they give you control back when they have a value for you, which is called “yielding”, when an error occurred and they didn’t catch it, or when the function terminated its execution. They do not run concurrently; in another language you might be familiar with, Python, has called them generators.

This, however, only sets ground for a cooperative multitasking system. In order to make it pre-emptive, we need to force the processes to yield after a certain time, e.g.:

Debug hooks are actually defined on a per-coroutine basis, defining them for all subcoroutines can only be made by calling debug.sethook() when the subcoroutine is created. A proof-of-concept of this is the following:

Which gives the following result: 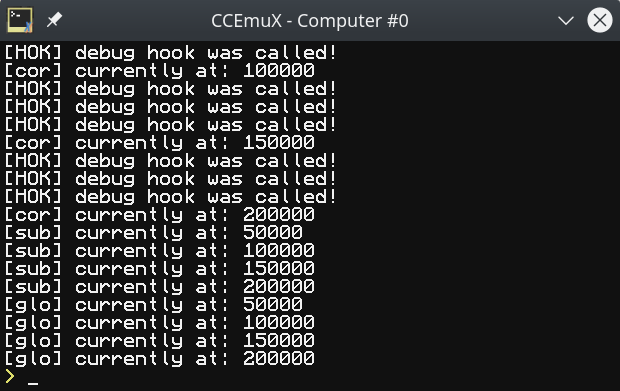 As you can see, the hook is only called for the coroutine it was set into.

In order to set up all of this, the process manager and the various processes must be able to communicate. This is done thanks to coroutines and yielding. If you haven’t done it, please read the chapter about Coroutines.

As explained previously, a process is a coroutine wrapped with some information about when and how to resume it; see startup.Process.thread. The BIOS actually does the same thing; see the os.pullEventRaw() definition.

However, we want to do it better than the BIOS, by allowing the user to:

In order to achieve this, thox hijacks the normal yielding system by replacing the coroutine.yield() and coroutine.resume() to add a special value at the beginning, invisible to the user, which represents the yield type amongst:

Based on these elements, you should now know what the hijacked coroutine functions bring on top of the system ones:

All of this behaviour is transparent to the user. Note that instead of calling coroutine.resume(), any code in the process can instead call os.capture(), which does the same thing except it does not automatically yield system calls but returns them to the caller, which can then imitate the system (useful for testing), transmit the calls and answers while sharing time between coroutines in a collaborative fashion (useful for making simple daemons), log system calls and answers in strace fashion, and so on.

Explain sandboxing, referencing context switching (use the link below).

Also, I should shift from loading the program outside with a distinct environment to start a process directly, and setup the sandbox and load the file from within the created function! This would allow me more liberties and make the whole thing more simple; this means that the startup.ProcessManager:add() method would take a function instead of a program, and just run it inside a coroutine and that’s all.

At computer startup, the BIOS is loaded (usually CraftOS, present in the ROM; see bios.lua). Then, if the related ComputerCraft settings are set appropriately, the startup.lua file from thox is executed; the related setting is either shell.allow_startup if thox is installed on the computer’s main disk, or shell.allow_disk_startup if thox is installed on a disk in a peripheral disk drive.

The main loop consists of the following steps:

How does this procedure manage the events? Event filtering? Function binding? Too many calls? Priorities (if any)? Passing calls? Alarms? Many things are to define in this process.