In Lua and with software in general, there is no such thing as plain text: everything is encoded as binary, generally organized in bytes (groups of 8 bits), and text is yet another construct above bytes by using what is known as character encodings.

Character encodings are the art of representing text as a sequence of characters over bytes. This is something that also applies in Lua, as Lua strings are nothing more than sequences of bytes with no validation or transformation; interpreting them as text is up to the programs and native APIs.

Real-world uses Unicode encodings, mostly, from the point of view of ComputerCraft:

In this document, I’ll describe common character encodings encountered while programming for or contributing to thox. 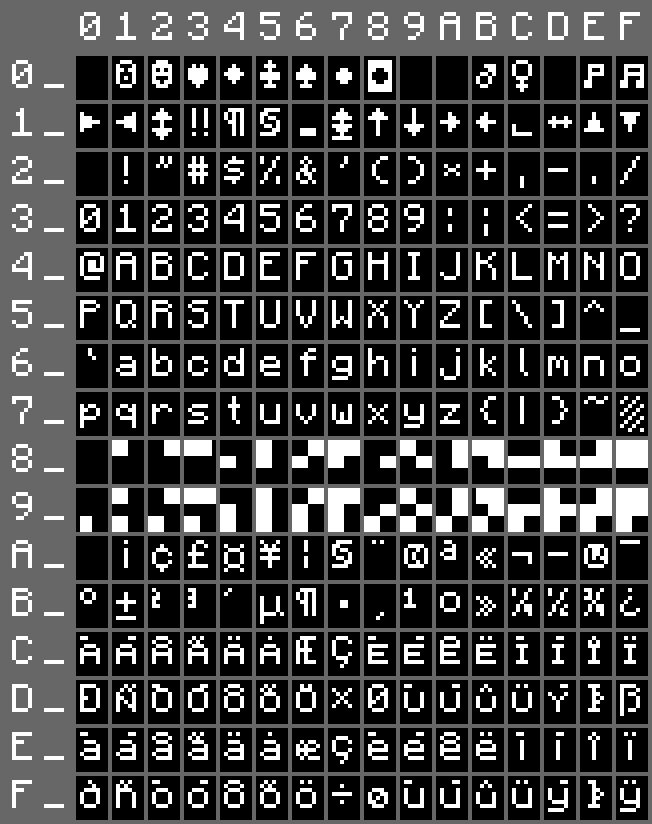 Monitors and terminals in ComputerCraft use a custom 8-bit encoding derived from ISO 8859-1, with the 00-1F range backported from Code page 437 (with some exceptions) and the 80-9F ranges replaced with custom graphical characters; the table above corresponds to the 8x11 glyphs defined in the mod.

This comes from the fact that Cobalt, the LuaJ fork specific to ComputerCraft, i.e. the Lua interpreter, decodes and encodes a Lua string by mapping byte values to Unicode codepoints; see LuaString.decode.

This encoding is used in every string passed on to the Lua code, and expected from every string passed on by the Lua code to the native APIs. When using native ComputerCraft or emulator (e.g. CCEmuX), there is no proper mapping operation when pasting to a terminal: for example, the character “♫” (U+266B) is not properly converted into the character 0x0E (15), instead only being converted to 0x3F (char. 63, “?”).

The code page layout is the following: